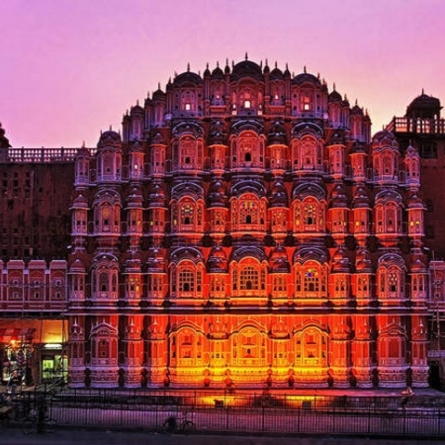 “Do You Know?  Hawa Mahal Jaipur is the tallest building without any foundation in the world.”

Royal heritage of Rajputs designed by an Islamic Ustad. “Hawa Mahal Jaipur” situated at Badi Choupad in the Pink city of Jaipur” Rajasthan, signifies an amazing mix of architecture and culture. No place inside this vintage building is rid of wind. The beautifully built Hawa Mahal allows fresh breezes from day to night making it a must-visit tourist place in Jaipur.

The beautiful Hawa Mahal is positioned at the heart of the mesmerizing pink city of Jaipur. One of the most renowned tourist attractions and leading landmarks of the city famous for its rich heritage and culture. It was constructed by Maharaja Sawai Pratap Singh of the Kachwaha Rajput dynasty in 1799. An incredible structure a standout in the center of Delhi. A huge massive wall built of red sandstone is a fascination in the busy life of Jaipur city.  The Hawa Mahal is a five-storied building having a structure of Lord Krishna crown comprising of 953 windows or jharokha designed beautifully that give a touch of the rich heritage of Rajput culture.

Famous for its Architectural facts Hawa Mahal Jaipur was designed like a beehive. It stands upright without any foundation which makes one feel the rich heritage of Rajputs, with 953 “Jharokha.” having small peeping holes. It is a five-story palace with a height of about 50 ft. Made up of Pink and Red sandstone. There are no steps to go up floors, but ramps. The first floor has Sharad Mandir for the autumn celebrations. The second floor of Hawa Mahal locates Ratan Mandir, which again is decorated with colorful cultural glassworks. The other 3 stories constitute Vichitra Mandir, Prakash Mandir, and Hawa Mandir. Built such that you get the best views of the pink city Jaipur.

Built by Sawai Pratap Singh,  Hawa Mahal in 1799. The job of its construction was given to Lal Chand Ustad. It was built as the continuation of The Royal City Palace. Hawa Mahal looks like a crown of Lord Krishna, which is significant to the devotion of Sawai Pratap Singh in Lord Krishna. Believed that it was constructed for the  Royal women who could relish the functions and festivals without being shown to the audience.