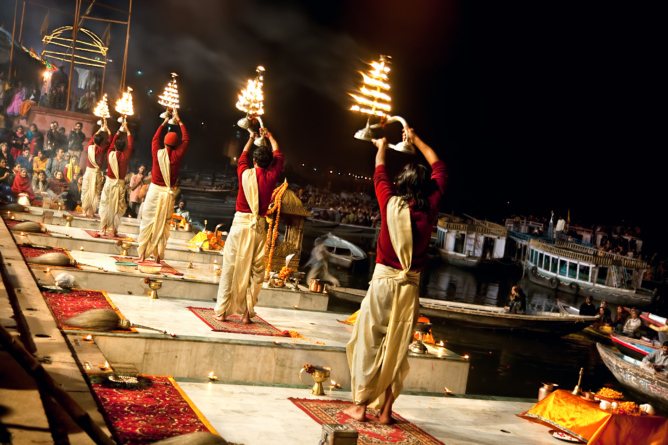 After the Beatles visited the Ashram of Maharishi Mahesh Yogi in the late 60s, Rishikesh creates a magnetism for spiritual seekers. Now renowned as the Yoga Capital around the World includes ashrams and numerous yoga and meditation sessions. The nearby river Ganga enhances pristine beauty while meditation. As the evening takes over, cool wind streams in the valley, the bells of the shrines played by sadhus pilgrims and tourists ready for the Ganga Aarti.

Rishikesh, not all about the devoutness, also famous for the white water rafting, backpacker hang-out, and Himalayan-trekking.

With the concurrence of Ganga and Chandrabhaga, Rishikesh the core of numerous old temples, yoga ashrams, and adventure sports in the foothills of the Himalayas.

Rishikesh the most fascinating blend of holy and adrenaline experiences. With the rise of the rafting industry along with expanding camping, Rishikesh evolved into a popular among tourists.

Rishikesh becomes remarkably prevalent around the world as the topmost religious destination in the years, notably after the Beatles came at the end of the 60s.  Settled on the divine shore of the Ganga river, the place becomes the hub for saints. There exist several ashrams that teach religiosity, yoga,  and Ayurveda.

However, in a previous couple of years, Rishikesh has additionally developed because being the center of sports, as a result, a large number of alternatives like Rafting, Rope Jumping, Flying Fox, and Mountain Biking etc.

Places for yoga in Rishikesh

The school of Yoga founded in the year 2006 by some youth group. This non-profit organization influenced people to get in the Yoga that the activity open for each individual.  Rishikesh Yoga school holds the epic center of Yog Peeth, building a powerful knowledge base of Yoga discovered in old times.

They have a unique, genuine and a strong sense of Yoga. They have the finest teachers in Rishikesh. Listed under the general public act 1860 of the Indian Government offers the notable Yoga Asans.

Dayanand Ashram Rishikesh arranged on the banks of the holy Ganges. An interesting association for Vedanta and Sanskrit inquiry. In front of the Ganges, Lord Shiva has a sanctuary in the form of Gangadharshwar.

The best place to learn yoga in Rishikesh. A library with over 5,000 titles on various topics, i.e. Vedanta, Indian and Western philosophy, Sanskrit grammar religion and yoga. Apart from this, a yoga studio where the general Iyengar Yoga camp is headed. The ashram constructed in the mid-1960s by Swami Dayanand Saraswati, who holds Vedanta’s world-class trainer and principal researcher of Sanskrit.

Parmarth Niketan on the banks of the holy river Ganga in Rishikesh one of the top yoga centers of India and the largest ashram of this region. Its spacious eight-acre campus has 1,000 rooms, with varying rates depending on the standard of living and viewing. Permission allowed for up to 15 days. Two yoga classes and three meals included in the daily value. Yoga in the ashram, Vedic heritage and spirituality, and a comprehensive program of the teacher training course. Welcome to participate in daily classes by donating external visitors.

The meaning “Land of flowers”, Phool Chatti Ashram was established at the end of the 1800s and situated in a peaceful natural setting from Laxman Hammock. The ashram is famous for seven days’ yoga and meditation program. Education ]focused not only on asana (asana) but on yoga path and a full spectrum of ashram life. Students will have to experience meditation, breathing (pranayama), hygiene, chanting, Muna (silence), worship (worship), kirtan (sacred singing), and other important aspects of yoga path.

Therefore, the land of yogis popular in many yoga ashrams present in the city of Rishikesh. Yoga camps,  seen by many people all over the world, recognized for helping Rishikesh revive tourists and get rid of the stress of life. From the evening aarti to the Triveni Ghat, the simple culture of the ashrams, the discovery of Rishikesh, the treatment of mind and the journey of the inner self.