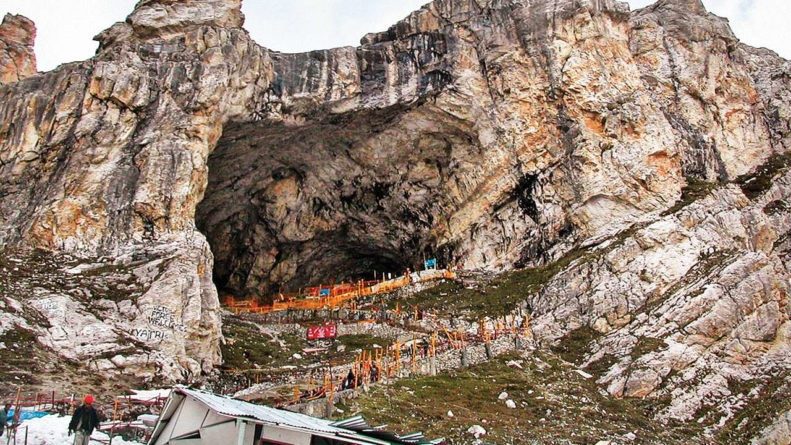 Amarnath a cave temple of Lord Shiva and one the most important shrine for Hindu devotees. Every year lakhs of followers of Lord Shiva come to visit this sacred place by walking miles on foot, and this walk of faith known as “Amarnath Yatra.”
Amarnath said to be the place where Lord Shiva’s Linga (A symbol of Shiva) appears every year by the freezing of water droplets and growing into the “Shiva Linga.” There are 2 more formations that are found to be of Parvati (wife of Lord Shiva) and Ganesha (Son of Lord Shiva and Parvati.)

This enshrining place inherits all its faith and devotion from its history. Claimed to be about a 5000 years old, Amarnath has now rooted itself into one of the most devotional places of Hinduism. According to Hindu mythology, this place said to be one of the homes of Lord Shiva. This cave is believed to be the place where Lord Shiva used to explain the secrets of life & eternity to her wife Parvati so that no one else could listen to them. Also believed that the growing and decreasing of the Linga in sync with the waxing and waning of the moon.

Interesting story of the 2 pigeons found in Amarnath.

Pilgrims going to Amarnath have claimed to see a pair of pigeons that suspicious as the pair seen since a very long time.
According to the historical story,  believed that when Lord Shiva was explaining the secrets of the creation of universe and immortality to Parvati in the cave, and egg got hidden beneath the skin of the deer on which Lord Shiva was sitting. The pigeon inside the egg is believed to have heard the story and the pair born out of it got immortal. So, the pigeons that are found by the pilgrims are believed to be those 2 pigeons which are immortal since 5000 years.

Positioned in Jammu & Kashmir. Attaining an height of 3,888m / 12,756ft. and about 141 km east of the summer capital of Jammu & Kashmir, Srinagar. With a height of about 130ft, the ice – stalagmite forms the structure of the symbol of Lord Shiva, by the freezing of water that sweeps down the mountain and grows vertically. The Linga formed by the ice is the reason of faith and trust of Hindu pilgrims going on Amarnath Yatra.

HOW TO GO FOR AMARNATH YATRA.

Amarnath yatra starts in the month of June (last week) and ends in the last week of August.
This year(2019): 28th June to 26th August

Get your registration done: You need to be registered with all your details before going to Amarnath Yatra.

The religious Yatra to Amarnath of 45 days begins in the late June and ends in late August. There are 2 trekking routes to reach Amarnath.

Things to be taken care of before going on Amarnath Yatra

Medical assistance – It is mandatory for all the devotees to have the Compulsory medical health certificate from a certified doctor of your state. All the Yatris have to ensure that they get the CHC either from the certified doctor or the list of approved doctors given by Shri Amarnathji Shrine Board every year. This is a compulsory act due to the weather and difficulties at the high altitude. Not everyone’s metabolism is favorable at that altitude.

Pilgrims also need to purchase pre-activated sim cards at the base camps of Baltal, as the prepaid sim cards don’t work up there.

Thus the Amarnath Yatra begins at the safer level.