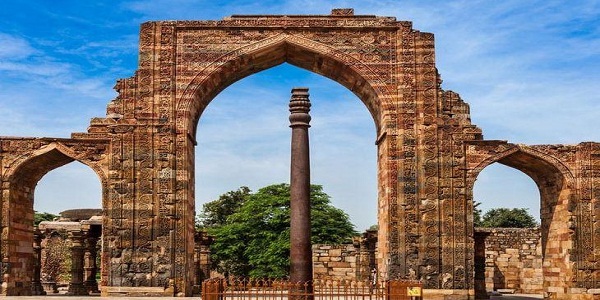 Out of many historic tourist places in Delhi, Iron Pillar one of the favorite spots for the visitors. More than six tonnes heavy pillar many archaeological as well as historical beliefs. The height of the Iron pillar said to be 23 feet 8 inches out of which 3 feet 8 inches below the ground.

A lot of inscriptions and graffiti on the Iron pillars. Believed that if someone could stand with the back on the pillar still their hand can meet covering the diameter of the pillar then good luck on their way. Due to this there a lot of wear and tear on the pillar.  then, that fencing done in 1997, around it to stop the damage caused by the visitors by practicing this tradition.

Initially, Iron Pillar mainstreamed in Madhya Pradesh by the ruler Chandragupta II. Iron Pillar, enclosing the Vishnu Temple as ‘Vishnudhwaja’, which tributes to Lord Vishnu. Where “Dhawja” means flag banner, which according to Vedic mythology appears at the top-most position at temples. Afterward, from Madhya Pradesh, Iron Pillar moved to Delhi within the Qutub Complex by Sultan IItutmish in 1233AD.

The Iron pillar was built 1,600 years ago and shifted to Delhi approximately 1,000 years ago before the mosque nearby was built. The ancient iron pillar should have fallen to dust and blown away before now. It is believed that the iron pillar was made for the king (Gupta period), also built to worship and honor a Hindu god-Vishnu. it’s not clear in the history that which ruler of Gupta dynasty built the iron pillar. It is believed that Chandragupta Vikramaditya was behind the construction of pillar but not confirmed.

There six lined Brahmi’s messages carved on the Iron pillar demonstrating the greatness, bravery, and victories of the Gupta dynasty.  suspected that the there is a sculptured Lord Garuda (Sun Bird)  craved at the top, which a remarkable attribute on many pillars as well, unlike Iron Pillar. With a diameter of 48cm, an adorable engraved base and the total weight of 6 tonnes. By the research,]proved that Iron Pillar referred to Gupta Dynasty, but did not have any proof revealing to whom exactly it belongs. It may be for Chandragupta I or Chandragupta II, respectively said to be Samudragupta or Vikramaditya.

In ancient times, the high content of phosphorus and mixing of charcoal irrespective of sulfur or magnesium prevents the pillar from getting corroded. 70% resistance of humidity by the Iron according to Delhi’s climate makes Iron Pillar rust free. High heat absorbent and due to this, it remains warm at night when the Delhi’s temperature slightly drops down. Breaking of dawn, Iron Pillar gets cooler for a while during the daytime, the temperature quickly gets re-established. The current science report state that the perfect combination of iron, hydrogen, and oxygen called Miswite had been coated over the Iron Pillar to prevent it from rust.

Rumors, that if someone able to encircle the Iron pillar from their hands, would definitely be the fortunate enough in their life.

Qutab Minar: Inclusive of both walking and driving distance for Iron Pillar from Qutab Minar 0 minutes.

India Gate: Iron Pillar  12kms (approx.) away from India Gate and it takes 14 minutes of driving to reach there