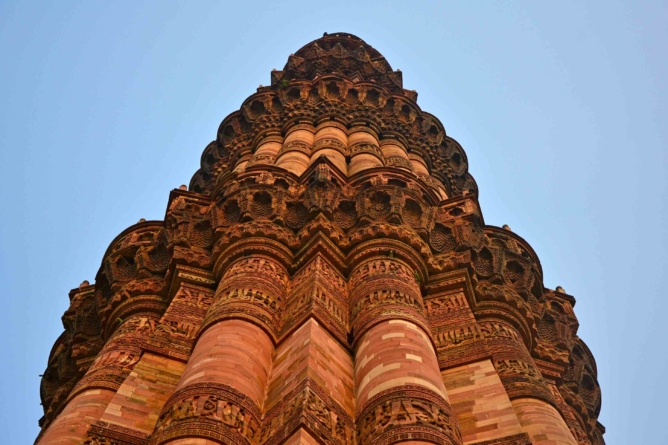 The Qutub Minar a beautiful tall structure is the world-renowned Indian heritage site,  located at Mehrauli in the capital city Delhi.  Outlined according to Indo-Mughal design. As a matter of fact, the Qutub Minar is listed in “UNESCO” World Heritage Site.

The Qutub Minar often spoke as Qutab Minar, or Qutb Minar is the highest minaret built with blocks.  Qutub Minar is a 73-meter (239.5 feet) the tall decreasing pinnacle of five stories, with a 14.3 meters (47 feet) base distance across, lessening to 2.7 meters (9 feet) at the highest point of the peak. Moreover,  it contains a winding staircase of 379 steps. Its plan is thought to have been founded on the Minaret of Jam, in western Afghanistan.

Notably, it is is the 2nd tallest Minar (73 meters) in India” and the first tallest minor is Fateh Burj (100 meters) which is situated in Mohali. The Qutb Minar is made of red sandstone and marble and the diameter of Qutub Minar is 14.32 m at the base and 2.75 m on the top.
It is 73 m. in height. and has 379 stairs. Particularly the Qutub Minar constructed for the purpose of mu’azzin (crier) to give calls for prayer.

As the matter of fact, many historians believe that it was named after Qutub-Ud-Din Aibak but according to some historians  and it was named in honor of the Sufi Saint Qutbuddin Bakhtiar Kaki
It is surrounded by several ancient and medieval structures and ruins, which is collectively known as the Qutb complex.

The evolution of architectural styles from Aibak to Tughlak is quite noticeable in the minar. Although the construction pattern and work differ from others. The 238 feet Qutab Minar is 47 feet at the base and tapers to nine feet at the point. The tower is embellished by bands of inscriptions and by four prominent balconies supported by decorated brackets. However, in destructions, the Quwwat Ui Islam Mosque in the Qutab area is the most majestic minar in the world. Qutab-ud-din Aibak began its production in 1193 and the mosque was built in 1197.

“The foundation of the tower was laid down by Qutubu’d – Din Aibak in 1192 AD and It was carried on by his successor, Altutmish.” The next three stories were built by Shamsuddin Iltutmish, the son – in – law of Qutubu’d – Din Aibak. Firoz Shah Tughlaq constructed the fifth and the last story In 1368. The Qutub Minar stories are surrounded by protruding balconies, encircling the tower.

To illustrate, Qutub Minar contains inscriptions in Arabic and Nagari, which describe its history. During Firoz Shah Tughlaq regime, the miner’s two top floors were damaged due to lightning but were repaired by Firoz Shah. Major. R. Smith rebuilt and renovated the Qutub Minar in the year 1829. Hence, Qutub Minar is further broken by an earthquake in the year 1505 and It was restored by Sikandar Lodi.

The site at which Qutub Minar is settled once owned by 27 Hindu and Jain temples according to the Archeological Survey of India.

The development of the tower was formed from the carved stones of numerous Hindu temples. Consequently, this is apparent from the Devanagari impressions on the various stone exteriors of the building.

Tower has  5 stories each and has an exclusive design carved moreover the verses from the Holy Qur’an are carved on sandstone walls of Qutub Minar.

The tower was hit by lightening a couple of times and was damaged. The subsequent rulers repaired it many times.

“The pillar is made of 98 percent wrought iron and has stood 1,600 years without rusting or decomposing.”

By Metro – board from any DMRC station and achieve Qutab Minar station and afterward take after rail guide to come to the Minar, by DTC transports, numerous sightseeing Bus Service offered by Delhi Tourism.