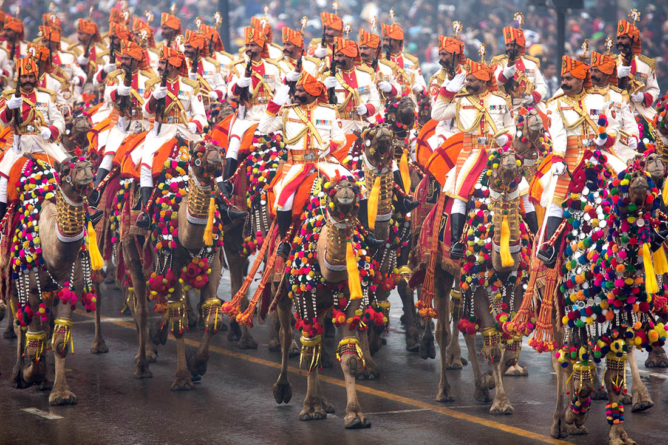 The Constitution was adopted by the Indian Constituent Assembly on November 26, 1949, and came into effect on 26 January 1950 with a democratic government system, leading the country to become an independent republic. The date 26 January selected as Republic Day as on this day in the year 1930 when the declaration of Indian independence was declared adverse to the Dominion status proposed by the British government by the Indian National Congress.

Republic Day a national holiday of India which celebrated every year on 26th January. This day celebrates the anniversary of the Constitution of India and the Republic of India from the British Dominion on January 26, 1950. After independence from the British rule on August 15, 1947, until the implementation of the Constitution of India till January 26, 1950, India’s leadership was in the hands of King George VI. India declared as a democratic republic nation on this day. The first President of India was Dr. Rajendra Prasad.

Republic Day celebrated with great pride and enthusiasm throughout India. Every year this year a grand parade organized in New Delhi. The parade starts with Rashtrapati Bhavan (Presidential Palace), Rajpath, near India Gate and near Red Fort, from Raisina Hill. Different regiments of Army, Air Force, and Navy participate in the parade with all its exquisiteness and official decorations.

On this day, Indians proudly flutter their tricolor, sing patriotic songs like “Vande Mataram”, “Jana Gana Mana” and pay tribute to all the freedom fighters who sacrificed their lives to gain freedom for India.

Later that period, the Constitution of India came into existence on Republic Day. Since then, on January 26, India celebrated  Republic Day. On this day, India declared as a full Swaraj country and in this way, we started celebrating this day as the anniversary of the full Swaraj Day.

The Constitution of India gave Indian citizens the right to choose their government. Dr. Rajendra Prasad took oath as the first President of India in the Darbar Hall in the Government House. India a great history behind celebrating Republic Day.

President Rajendra Prasad participated in the first Republic Day Parade in Rajpath, New Delhi in 1950. The main Republic Day celebration held in front of the President of India at Rajpath in the National Capital, New Delhi. On this day, festivals are organized on Rajpath, which done as a tribute to India, Its unity in diversity and prosperous cultural heritage.

Delhi Republic Day Parade organized by the Ministry of Defense in New Delhi. Being in front of India Gate from the Gates of Raisina Hill on Rashtrapati Bhavan (Presidential Residence), Rajpath, this program the main attraction of the Republic Day celebrations of India that lasted three days. The parade depicts India’s defense capability, cultural and social heritage.

In addition to the Navy, twelve to 9 different regiments of Indian Army, and the Air Force march past with their band in all its nuances and official decorations.  Twelve groups of different paramilitary forces and other civilian forces of India also participated in this parade.

The Beating Retreat Festival officially organized after the end of Republic Day celebrations. Organized on the third day after the Republic Day on the evening of 29 January. Done by the band’s three wings, Indian Army, Indian Navy, and Indian Air Force. Besides, this site located at Raisina Hill and an adjoining square, Vijay Chowk, which runs towards the end of Rajpath from the northern and southern block of Rashtrapati Bhavan.

As the matter of fact, the chief guest of the ceremony the President of India, who comes to escorts by a cavalier unit (PBG). When the President arrives, PBG asks the commander unit to give a national salute, after which the Indian National League, Jana Gana Mana played by the army. The army largely develops a performance demonstration by the band, in which the band of military band, pipes and drum bands, buglers and various Army Regiment, besides the Navy and Air Force bands participate, which are popular like Abide On Me, Mahatma Gandhi’s favorite In the end, bhajans, and all the better than where the tunes play.

Republic Day a national holiday in the country. Moreover, The main attraction of the day the Republic Day Parade in the capital city of New Delhi. Participate in the annual program run for approximately three hours throughout the country. The parade starts from Rajghat under the chairmanship of the President of India and the Prime Minister. Army, Navy and Armed Forces march on their way, saluting freedom fighters and eminent personalities.

Therefore, another important part of celebrating Republic Day in New Delhi horse-march. National Cadet Corps (NCC) and selected Scout Boys are a part of this event. The parade followed by the regional dance, patriotic songs, and military bike shows. To see a spectacular show on Republic Day in India, stay in New Delhi during your visit to India.

The chief guest for Republic Day of India 2019

Fifth and current President of South Africa “Mattamela Cyril Ramphosa” be the chief guest of India’s 70th Republic Day 2019.  Siril Ramfausa invited by Prime Minister Narendra Modi during the G20 summit, held in Buenos Aires, the capital of Argentina. Selected (from South Africa) specifically for this occasion because India celebrating the 150th birth anniversary of Mahatma Gandhi. Who very close relations with the people of South Africa. However, PM Modi said visit of South African President to India would help in enhancing the relations between the countries.