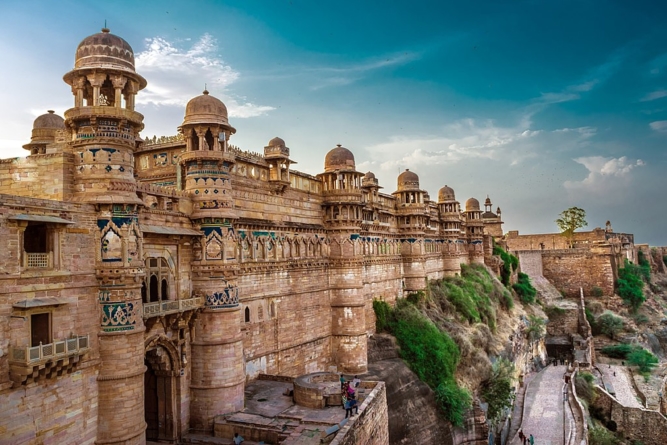 The Fort of Gwalior, situated on the top of a hill, one of the best forts of India. Considered one of the most impenetrable forts in the country. Known for its great architecture and rich past, the fort of Gwalior a fascination on the journey of Central India.

Referred by Mughal emperor Babar as Moti among the forts in India, the fort of Gwalior one of the most impermeable fortresses in the entire north and southern India and a place where you must go. Located on the top of a huge rocky mountain near Gwalior in central India, in the middle of India, the fort includes a defensive structure and two huge castles. This structure, which dominates the whole city of Gwalior, has been installed, An architectural miracle which testifies to the excellent craftsmanship present during that time. Touching the skyline of Gwalior, this major building ought great importance for the country’s rich history and heritage.

Gwalior fort constructed in two parts, in two different time periods. During the first phase of its construction during the Tomar regime in the 8th century, the middle part of the fort constructed. Later, in the 15th century, the construction of the Gujari Mahal and Man Mandir done by Raja Man Singh Tomar for his favorite Queen Mraganayani. This fort spread over an area of 3 km and it can be seen from every nook in the city and especially popular among history enthusiasts, who go to the place to see India’s rich past again.

This architectural miracle has an intriguing history and it has passed many times by the occupation of a dynasty. The entire fort complex well maintained and includes a temple, water tank and palaces such as Man Temple, Gujari, Jahangir, Karan, and Shahjahan.

The exact time of the construction of Gwalior fort not yet known. According to the legends, this grand fort built in the 3rd century by a local King, Suraj Sen. King lately healed of the disease leprosy by the aid of a sage named Gwalipa, who gave holy water from a sacred tank. King then constructed the fort and marked it later the sage. Gwalior derived from the name of Saint-Gwalipa. Rishi named Pal, which means protector, on the King; And declared that the fort would be in possession of his family until they receive this title. Interestingly enough, the fort remained with 83 descendants of Suraj Sen Pal, but the 84th descendant named Sharan Karan lost the fort.

In the following years, the fort of Gwalior has seen many ups and downs It changed hands too many times and remained in possession of the Tomars, Mughals, Marathas and the British, eventually handed over to the Sindhis. A very bloody history associated with this royal fort. The Mughal emperor Aurangzeb imprisoned and later he killed his brother Murad in the temple at the fort. Jauhar Kund, located in the premises, marks the location where after the death of the King of Gwalior in 1232, the women of Haram burnt themselves. Nevertheless, this memorial fort has a unique place in the history of mankind, the place has been used so far.

With well-built premises, the complexes of the fort include many temples, palaces, and water tanks. The palaces include Mann Mandir Mahal, Gujari Mahal, Jehangir Mahal, Shahjahan Palace, and Karan Mahal. Situated in the area of three square kilometers (1.1 square miles) and has two entrances: The Main entrance north-east towards the Elephant Gate (Elephant Bridge), which has a long ramp and the other at the cloud gate at the south- towards West. Man Temple Palace sits on the north-east.

Jain temples make unique monuments inside the fort, in which Siddhal caves and Gopachal rock-cut Jain memorial are two areas, which were completed with thousands of Jain Tirthankara statues during the Mughal invasion. Temple of Teli and Sahastrabahu (Saas-Bahu) temple are two architectural forms rich in Hindu temples. Gurudwara Data Bandi another holy place built inside the campus of the fort, and this the place where Sikh Guru Hargobind Sahib kept in captivity by the Mughal Emperor Jahangir. Man Temple Palace, Gujari Mahal, Eshi Khambaw Ki Bawli, and Suraj Kund other important monuments found in the campus.

The best time to visit Gwalior fort during the autumn and spring, which occurs between October and March. You can also enjoy the journey in the time of monsoon when the surrounding area green, and the air fresh and crisp.

How to Reach Gwalior Fort

The best way to reach the Gwalior fort the auto-rickshaw, which can reach the western entrance gate of the fort to the Urwa Gate. The fort has two approaches, the second the eastern gateway which does not allow any vehicle. Both paths vertical trek after a point. However, a stunning view of this striking fort from the eastern side makes the whole trip meaningful. Make sure that do not miss the beautiful rock statues on the way from the west side.