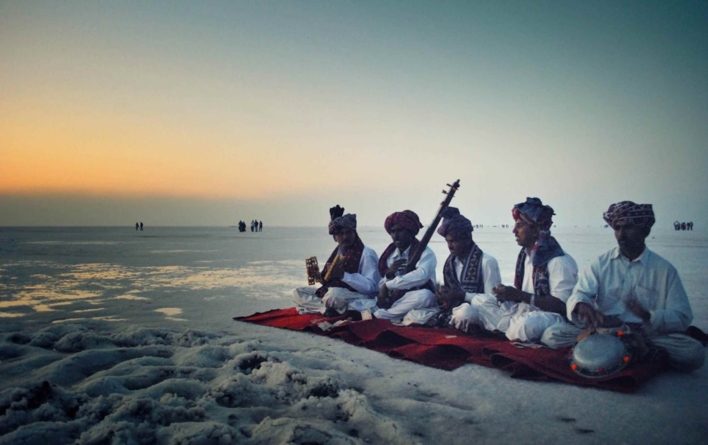 Rann lies in the splendid region of Kutch, Gujarat. Kutch, a pure bliss comprising of abundance traditional landforms and rich heritage. Filled with a plethora of natural beauty, traditions, cultural celebrations, and the joy depicts the splendidness of the Kutch. During the time of Rann Utsav, the place looks like heaven on earth. A carnival of traditional dance, folk music and incredible sights of white Rann a must visit place when it’s a full moon.

Above all, the remarkable picture of the infinite white desert below the light of beautiful moon portrays a magnificent formation of Mother Nature, distinctive to this world.

An abundance of diverse culture, a profusion of folk music and incredible dance forms in the glorious land of white desert create a magnetism of delicacy of Kutch. The land of art, music people, nature and dance the most ecologically and ethnically diverse city.

During the night of the full moon of amazement, a three-day festival celebrated every year between the awe-inspiring and odd landscape, with fun, hospitality, strength and traditional taste, which known as Kachch or Pan Festival. This three to a four-day carnival, held at various places within Kutch, surrounded by local and tourists people, which brings a visitor to the indigenous cultural and ethnic taste. Honey parched grasslands of Banni perform the most spectacular architecture of the outstanding architecture as an exhibition platform for different categories of art and crafts in the region. While an array of folk music and dance performances organized in the full moon night view provides the most enchanting experience.

The celebration of festival Rann Utsav started in the year since 2006 with the vision of Hon’ble Prime Minister of India Shri Narendra Modi. He visualizes this festival to create a new identity to be marked on the global map which now celebrated every year in the month of  November to February in Kutch, Gujarat.

– Kutch or Rann festival, a unique expression of the various cultural ethos of the region known for the enthusiasm of ethnic taste and festivities. This festival offers a special opportunity to see the creative simplicity of artisans and artisans, a mixed array of folk music and performances, mixed representation of culture and communities, as well as a large variety of ecology. All this describes and defines more Kutch and people.

– Rann Festival a vibrant festival of Kutch, Gujarat, India. A carnival of beauty, music, dance, white ritual beauty and many things done when traveling under the full moon.  Official dates of the Rann festival, it will be from November 1, 2018, to 20 February 2019.

– Kutch famous for its Great Ran of Kutch, a vast white salt desert situated within the boundaries of Thar Desert. The more we know the Rann of Kutch for its great salt desert, also known for its artistic handicrafts.

– The Rann of Kutch famous for its white salted desert sand and is distinguished as the world’s largest salt desert. Ran means the desert in Hindi, which in turn derived from the Sanskrit word ‘Irina’, which means desert too. For transportation options, a private vehicle can be rented from Bhuj, which 102 km away from Rann.

– The Great Battle of Kutch a salt group in the Thar Desert of Kutch district of Gujarat. Approximately 2900 square miles in the area and considered one of the world’s largest salt deserts. The area inhabited by Kachhi people.

Gujarat Tourism Officers conduct programs in Kutch to showcase the rich culture of India’s largest district. Under the protection of Vibrant Gujarat, this festival a unique opportunity for people all over the world to visit Kutch and experience the real flavor of the region. The Gujarat Tourism Department organized by the end of February every year after the end of February New Year, the Rann Festival promotes the natural beauty and other important things of the amazing area of Kutch. During the winter season in the full moon night, the white sand desert all seem more attractive. After understanding the importance and ability of this piece of land, Gujarat’s tourism department designed it, to lure travelers all over the festival. In the 200’s, this festival became a permanent event in winter season from 3-4 November to February.

In India, the northern boundary of Greater Rann of Kutch forms an international boundary between India and Pakistan, it heavily patched by the Border Security Force of India (BSF) and the Indian Army exercises its troops to enter this harsh area.

This insignificant salty lowland, filled with natural gas, a picture of a perennial border dispute between India and Pakistan, which contributed on April 1, 1965, Indo-Pakistani War of 1965. Later that same year, Harold Wilson, United Kingdom’s Prime Minister, convinced the fighters to end the disputes and to end warships and establish a tribunal. Besides, a decision in 1968, in which Pakistan received 10% of its claim of 9,100 square kilometers (3,500 million mi). 90% provided to India, although India claimed 100% of the area. However, tension rose again during the Atlantic incident in 1999.

Due to closeness to the Pakistani border, the region of Kutch a sensitive area. Hence, written permission for the trip to the salt desert needed. It can be taken from a village Bhirandiyara famous for a sweet made from milk, Mawa), in the way of the boundary, about 55 km from Bhuj. Cost Rs 100 per person, 25 for motorbike and Rs 50 for a car. Submit the photocopies of your ID, as well as they, check the original. Note that checkpoint cannot open until late in the morning (about 11 o’clock). Get permission from Gujarat Police DSP Office in Bhuj near Jubilee Ground ( closed on Sunday and every second and fourth Saturday). At the entrance of the salt chowk, the officers give written permission to the army post at about 45 minutes.

The festival, best place to explore the culture and traditions of Gujarat and moreover,  perfect to avoid the hustle and bustle of city life. This event celebrated from November to February during the winter months; thus, the weather perfect for the holiday in Gujarat.

The festival offers many options to tourists such as shopping. There are many items on display in Utsav such as unique Gujarati handicrafts and Kachhi embroidery, silver utensils, jewelry, kitchen utensils, mirror work etc. They can be purchased for home use or taken home as a souvenir.

Folk artists of the whole state gather together to enchant tourists with their music on festivals. Tourists can join activities like desert safaris or ride in a hot balloon and from the top can see an aerial view of the spectacular Kutch desert. There are also some medium adventure rides which are aimed at children. Tourist can also participate in Camel Cart Exercise, and Golf Carts. In the nights, you can stroll around the tent and see the glimpse of the starry sky. Visitors can visit some of the magnificent temples like Narayan Sarovar or Kera Shiva Temple. For nature lovers, Kutch desert wildlife nearby and here you can explore the unique animals of the state.

As the matter of fact, one of the hottest regions of India with the temperature rising up to 50 °C. In summers and can goes down to below 0 °C in winters.

Rann of Kutch reached via Bhuj, Dhordo and the adjacent railway station in the city of Bhuj. Moreover, Ahmedabad is the nearest airport.

Map Of Rann of Kutch